From Age of Aincrad Wiki
Jump to: navigation, search 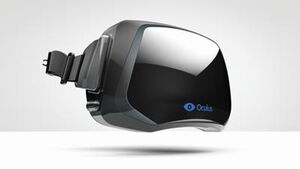 The Oculus Rift is an upcoming high field of view (FOV) virtual reality head-mounted display (VR-HMD). It is being developed by Oculus VR. It will feature wireless gaming and a 1080p high definition (HD) display.

The Oculus Rift is integrated and working with the game, as it is still in development. Since the Oculus Rift is implemented it will not give any advantage to players who don't have it. As Oculus Rift is not needed to play the game, it might not even be an advantage but more of a disadvantage. Its primary use is for immersing the player in the game world even more, and experiencing the game closer to what a real VRMMORPG game might feel like.

"Right now, we have integrated Oculus Rift with the game, but with the lack of funds to afford development kits we can't build the game around it. It may be something we add towards the end of open beta."